A large infrastructure organisation had two key developmental goals for its senior leaders.

The first was to increase peer-based collaboration. Leaders were siloed. There were power struggles. Important projects with key stakeholders were mired in petty politicking. Work tasks were more dispersed than ever before, across functions, departments and geographies.  To increase their impact, leaders needed to interact more broadly, and more openly.

The second goal was to reduce the reliance on external coaches by increasing the coaching capabilities of senior leaders.

The program began with a workshop to set up peer groups that would collaborate in coaching circles. It provided coaching tools and resources, integrating those that the organisation was promoting, and adding from my toolkit.

Then a series of coaching circles took place over a six month timeframe. Leaders came together in their coaching circles to help their colleagues meet their leadership challenges. Peers identified with their colleagues’ challenges, and offered support and suggestions through the coaching process. I coached the circles so that individuals developed greater capability. As participants coached each other, they identified closely with the issues and challenges they were facing, and created more of that ‘connective tissue’ the organisation sought.

And by taking a generative approach with their team, leaders grow future leaders. 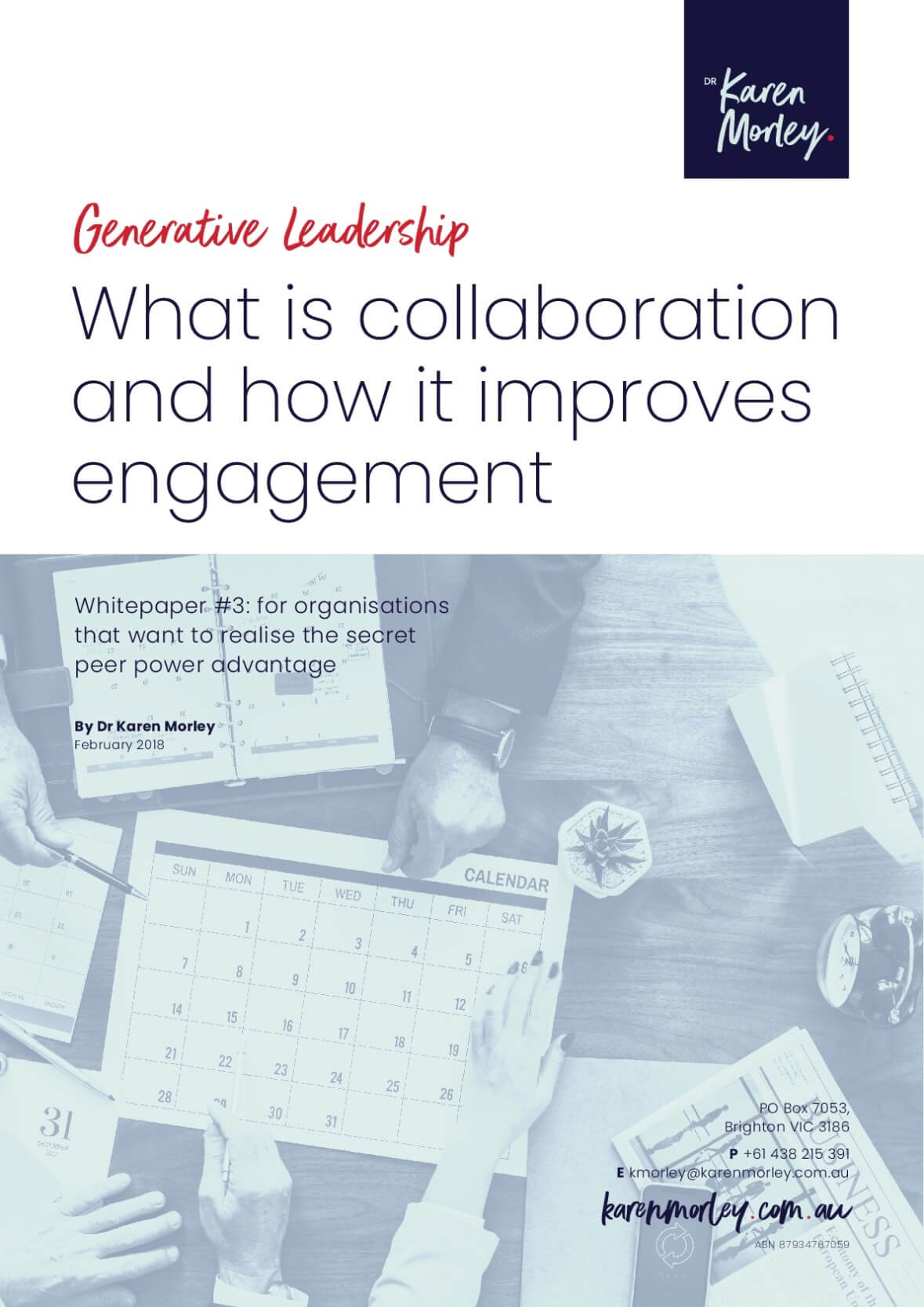 Peer collaboration affects 36% of the top drivers of organiational culture, more than line managers do. Team members interact with about half of their coworkers on a regular basis; with that reach, they have greater potential to impact engagement than line managers do. Yet few organisations realize the benefits. In too many, peers don’t collaborate, they compete, they reinforce silos and protect their turf. And end up feeling frustrated and unproductive.

When leaders coach, they create a culture that is empowering and energising. When coached, people develop, their motivation elevates, and they engage more deeply. Organisations with excellent cultural support for coaching and where senior leaders coach frequently, experience:

Organisations need leaders who can make change happen as quickly as possible, with maximum uptake and minimum fallout. Coaching facilitates the change process.  Coaching shifts the power dynamic between leader and team. Through coaching, power is granted, it is given generously, and it empowers. Leaders willingly share their power. Leaders see power as more like a see-saw, balanced between themselves and others, than a jungle-gym, where the aim is to hold the highest ground.

Leaders who coach convey benevolence. This signals genuine caring and support. When people experience their leader as supportive, trust deepens.

There are compelling reasons for leaders to coach. Yet, unless they are very experienced at it, they rarely do. They are captured by everyday pressures to produce results. They don’t have confidence in their coaching capability. The connection between coaching and strong engagement is not clear.

Leadership Coaching Circles bring together small groups of five to eight peers to develop coaching capability. They collaborate on shared challenges, focus on real issues, practice together and learn from each other. The members collaboratively coach each other. The conversation structure promotes inquiry and exploration.