Avery is achievement-oriented, conscientious and agreeable She’s a high potential, ready for promotion to the next level.  But she’s not sure if she wants that. She’s not just a leader, she’s also a human.  She has a partner, two kids, a dog, a father who has just been diagnosed with early onset dementia. Life is full – intellectually, physically and emotionally.

With her abilities, she’s loved by bosses, co-workers and her team. At her best, when she’s purposeful, focused and influential, Avery feels on top of her game; she feels a surge of vitality. She’s invited to participate in more projects, to give advice and support others: ‘If you want something done, give it to a busy person.’ But then there’s a tipping point, and it’s not always easy to notice it.

Overworking, caring too much and trying too hard means Avery edges towards burnout. Her thinking fractures, she’s burdened by others’ emotional needs and feels like a fraud. This is what overwork does to amazing people. She’s concerned about what would happen if she was promoted to a more senior level.

In a world where overwork remains an expectation for knowledge workers, flexible work is a pipe-dream. 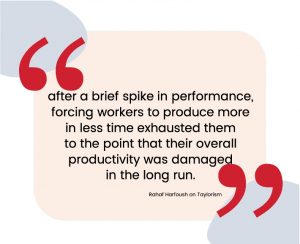 And it’s not just that the organisation that expects overwork, it’s Avery herself. Her work ethic and need for achievement mean that she sets her standards high.

No matter how flexibly Avery is able to work, whether from home or the office, whether she can choose when she starts and finishes, is pretty much irrelevant to managing the expectation to overwork that she faces daily.

No matter how she manages the where and when, she’ll still overwork.

For more than a century, the way we think about work expectations has been to increasingly normalise overwork.

As Rahaf Harfoush writes in Hustle and Float, “Frederick Winslow Taylor was actually fired by Bethlehem Steel for failing to produce tangible results. It turned out that after a brief spike in performance, forcing workers to produce more in less time exhausted them to the point that their overall productivity was damaged in the long run.

Taylorism isn’t just stacked against creatives but against the very people it was originally designed for.  Yet we remain trapped by it.”

Three big questions that we should be asking:

Make sure it’s not you.

If you need to be more purposeful, focused or influential to be your most amazing, check out my recent whitepapers here.

Book a call with me today to find out more about how my executive coaching can help you work smarter, influence more authoritatively and use your talents to their fullest extent.